At a very sunny Ledbury track it was the final round of the MKS sponsored winter Nitro X Cross Series  – rescheduled from Nene Valley due to flooding. A field of over 50 drivers at this ever popular series, and finally some nice weather would mean it was going to be a great race day. It was the 6th and final round so series points and prizes were also up for grabs. 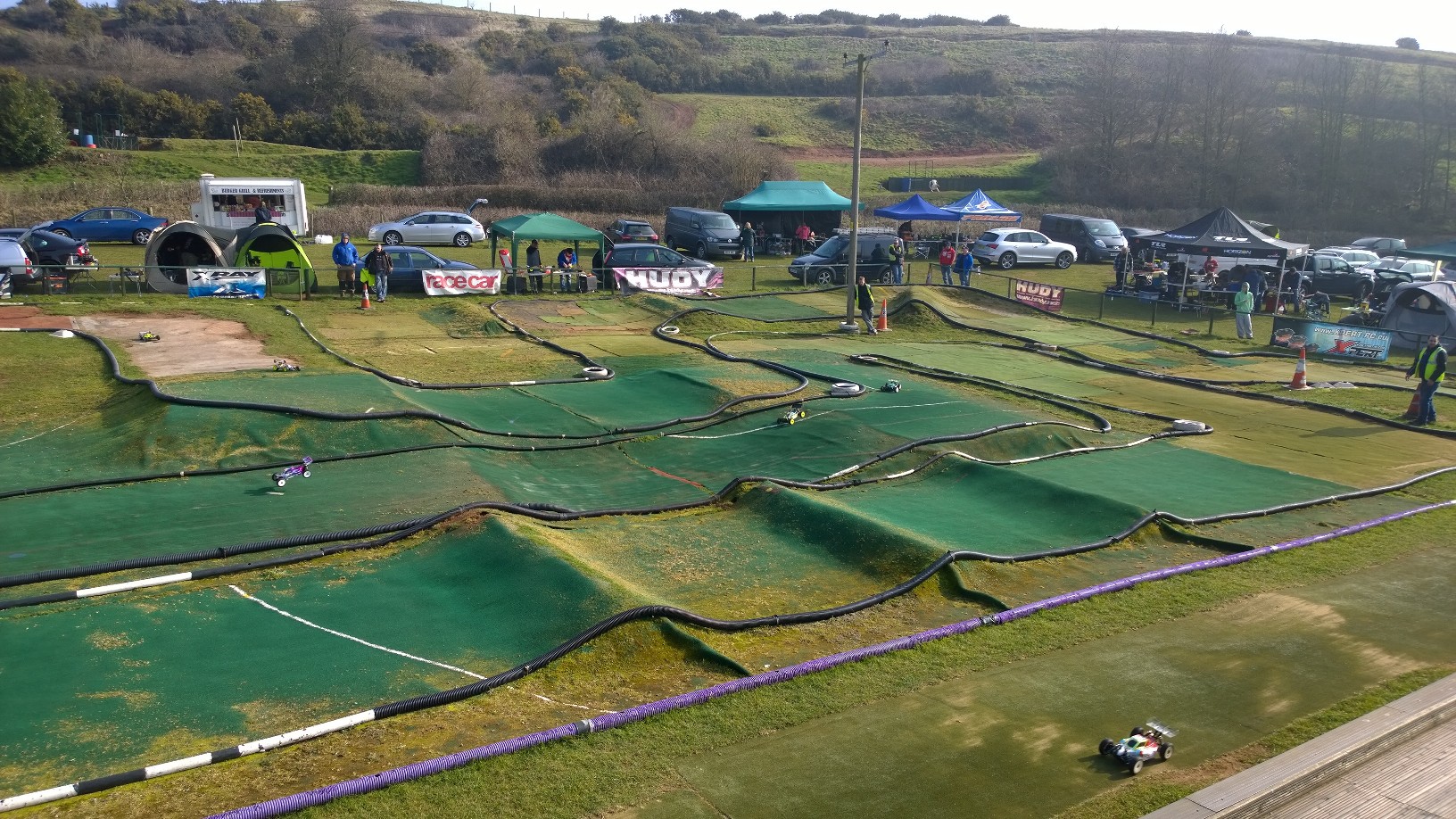 In Nitro Jon Howells was the front runner from Round one, the CML driver took the TQ in every round of qualifying with his AE – he dominated the qualifying and he was going to be hard to catch in the final – showing real pace and great consistency.  Ben Billing, Chris Leighton and Lloyd Pit were fighting it out for the other top spaces, taking a 2nd place in each round each. Only separated by seconds these guys were scrapping on track all day and in the end Ben took the final round to take 2nd on the grid with Chris 3rd and Lloyd 4th.

Onto finals – In the D final some unlucky qualifying put Josh Powney and Nathan Powney down the pecking order but putting the unfortunate qualifying behind them, they both showed there pace, with Josh taking a good win by a lap and Nathan taking 3rd. Young Simeon White finished in the middle of them – the young man taking a bump into the C final with ease.

In the C final – Josh once again showed his talent and he and his Sworkz Evo 2 took another win, Simon Davies and Colin Davies had a good on track battle over the 15min final and Simon just managed the 2nd place by only 5 seconds – all taking the bump up into the B.

In the B final there was some very close racing – all drivers very close in place, Gareth Oldfield and his Losi  4 took the win over Alex Page in second and a great drive by the AE of Mark Westwood took him from 8th to the final bump up place in 3rd.

In the A final it was all about Jon Howells – He lead from start to finish holding off the challenge from Sworkz driver Chris Leighton with fellow AE driver Jon Griffiths taking the final podium place of the day by just over a second from Matt Box and his Kyosho. 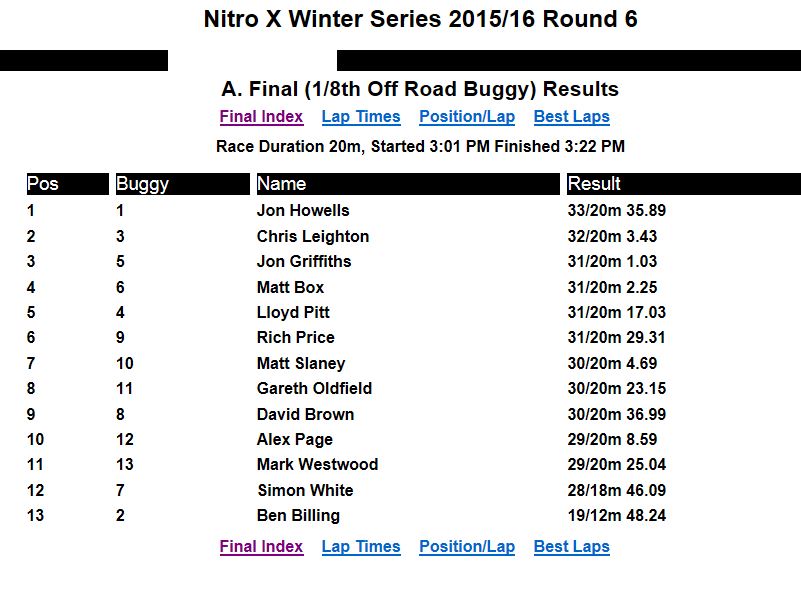 In the EBuggy final it was going to be between Chris Lovell and Milan, Chris had a great start and went on to take a fine win after an electrical problem meant Milan had to retire a few laps from the end. Rich Price and his XRAY took 2nd and Mark Hicks and his Techno took the 3rd spot. 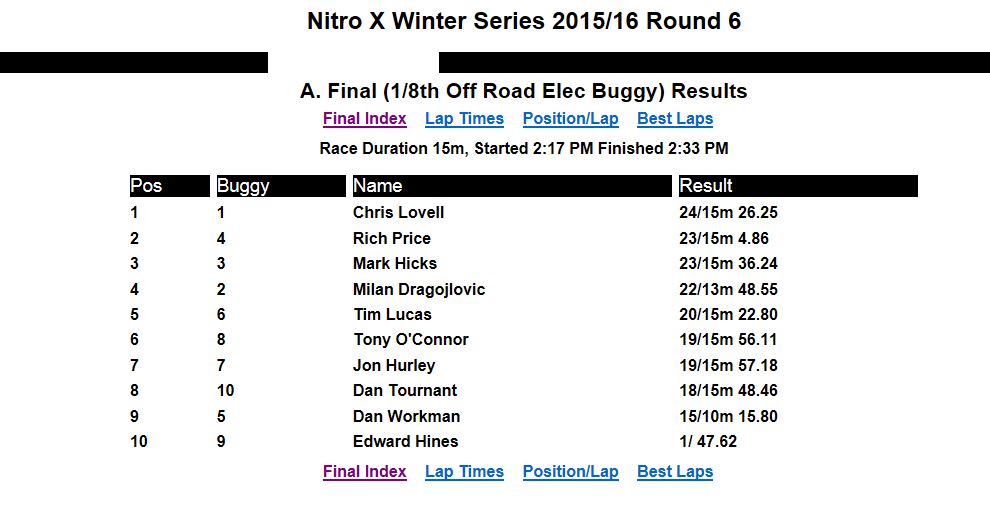 Onto the series trophies and prizes they were very close. In the Nitro class it was Milan Dragojlovic that took the series by 1 point over Jon Howells and Chris Leighton with his great 2nd place at the final round had clinched 3rd in the championship.(Top 3 pictured below)  Top Veteran was Jon Howells and Top Jnr was Aaron Ford. 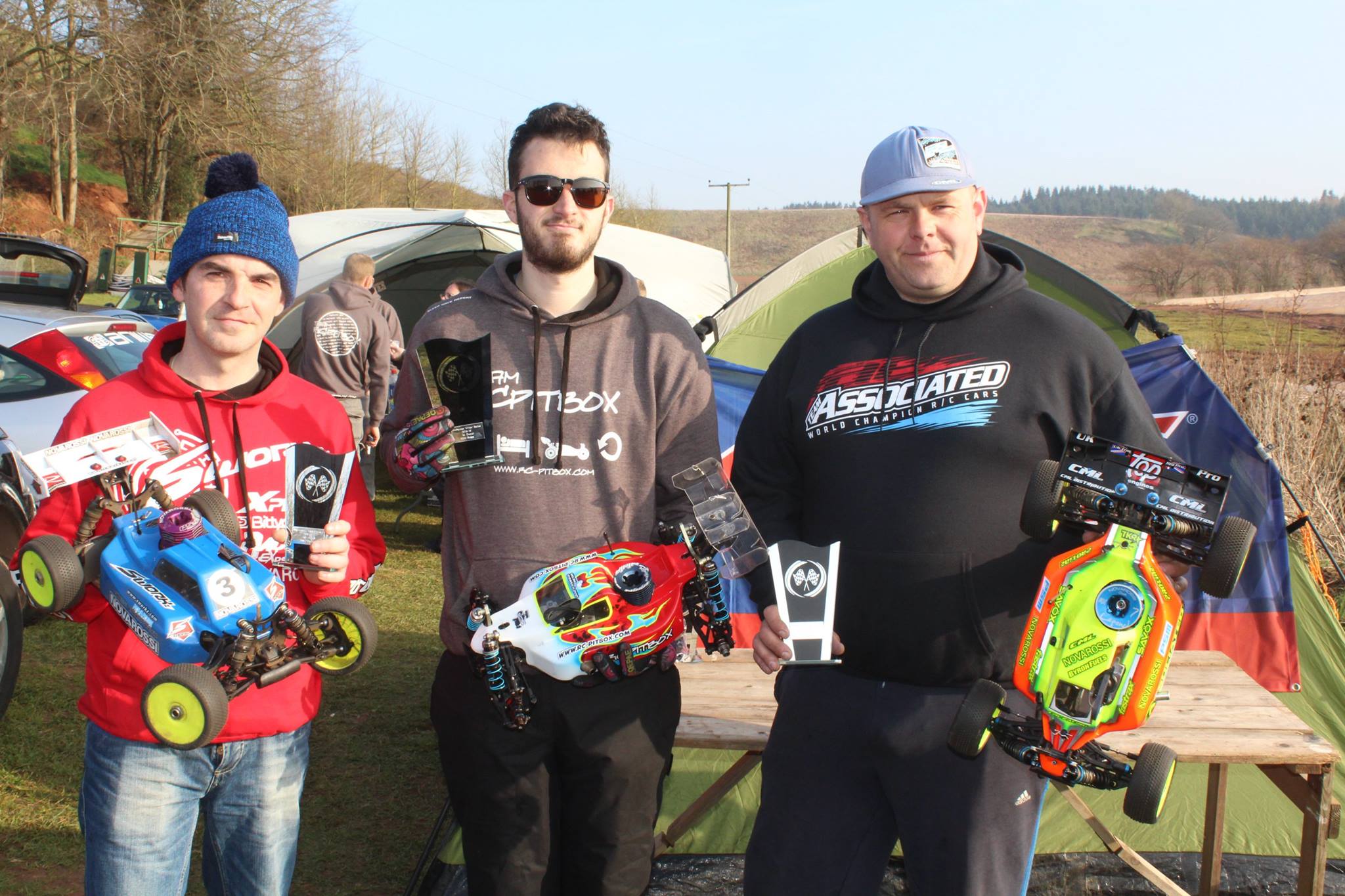 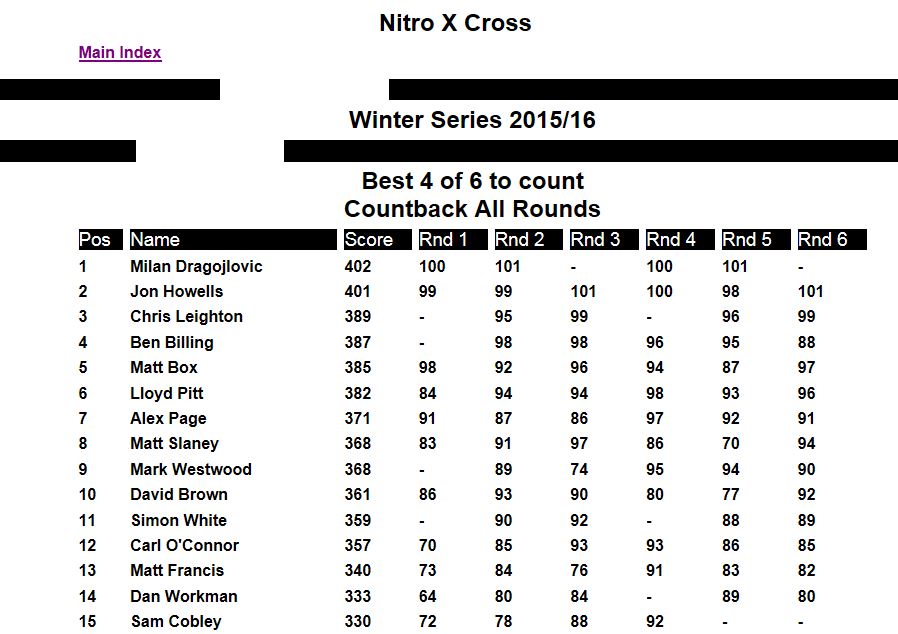 In the electric class Chris Lovell (pictured below) with his TQ and win in the final round had secured the top spot and took the series overall from Stuart Harlow in 2nd and Huw Jenkins in 3rd. Top veteran was Tim Lucas. Top club in the series was Frankley. 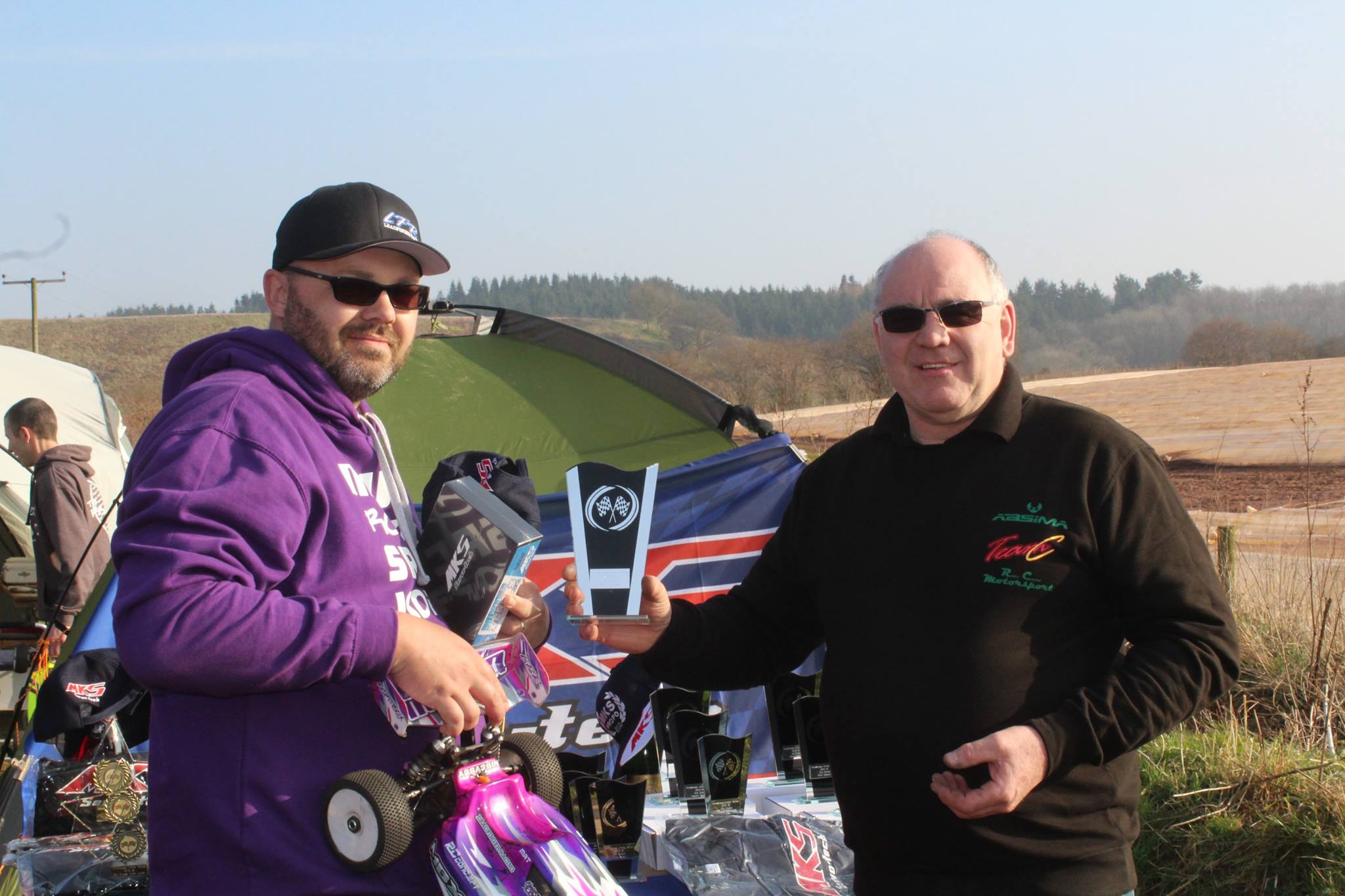 A great end to a great series – thanks to all the NitroXcross guys and gals, the sponsors MKS for the great end of season prizes and of course all the clubs and competitors! And a big well done to Milan Dragojlovic and Chris Lovell on taking the respective series. For a full list of the results and all the series information go to http://nitroxcross.co.uk/ 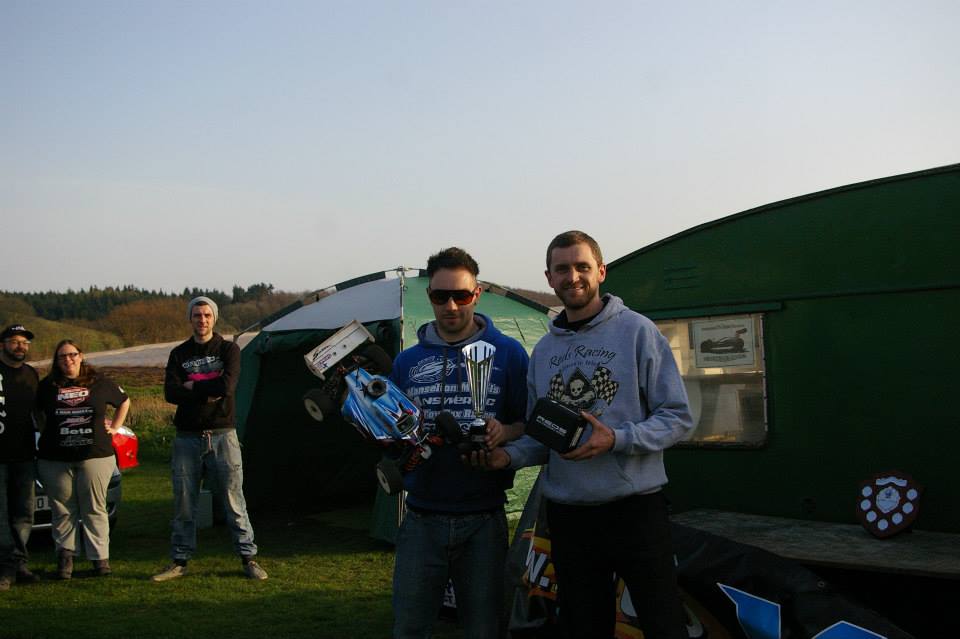 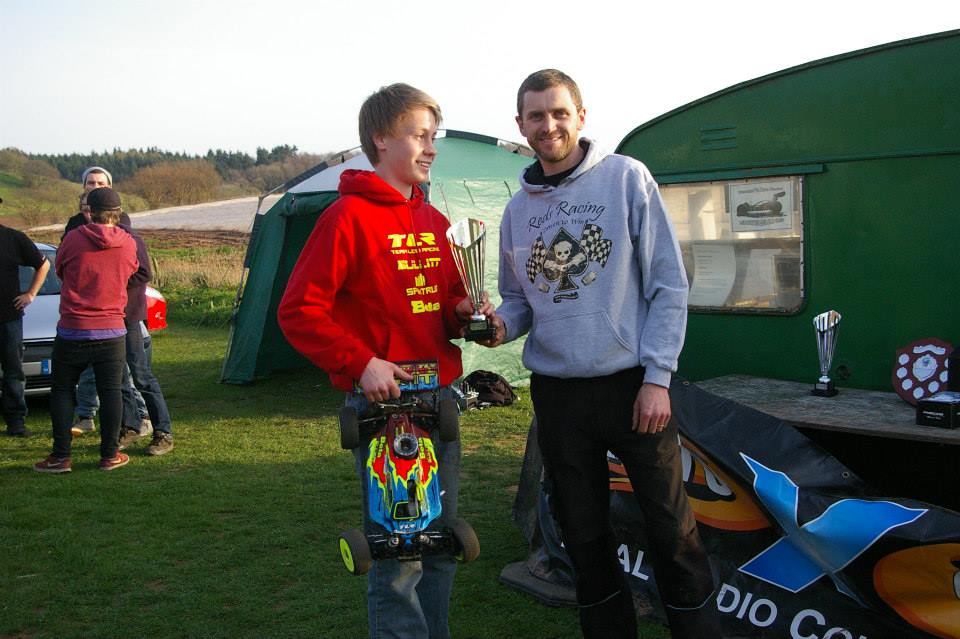 Thank you to everyone who came and supported Nitro X Cross this series. With over 700 entries across the series over 14 rounds and 6 venues it really has been an enjoyable championship for all abilities. We hope that everyone enjoyed themselves and we look forward to seeing you over the winter or at next years summer championship. Thanks to John and Colin at JC Racing products for sponsoring the series, Bryn, Cate, Matt and Jules for organising and running the series, the clubs involved for providing some great venues, all the helpers from all of the clubs involved for doing their bit and most importantly the 169 drivers, pit crews, lads dads and W-A-G’s who made it happen by entering the events and coming along to take part. Its been a good one

Although 2 rounds still remain (Stoke Nitro September 14th and 15th) Some awesome driving from Ben this season means he can relax on presentation day after wrapping up the title early.

Here is the drivers standings with 2 rounds to go (top 30 from 137 entries, full list can be found on the results pages) 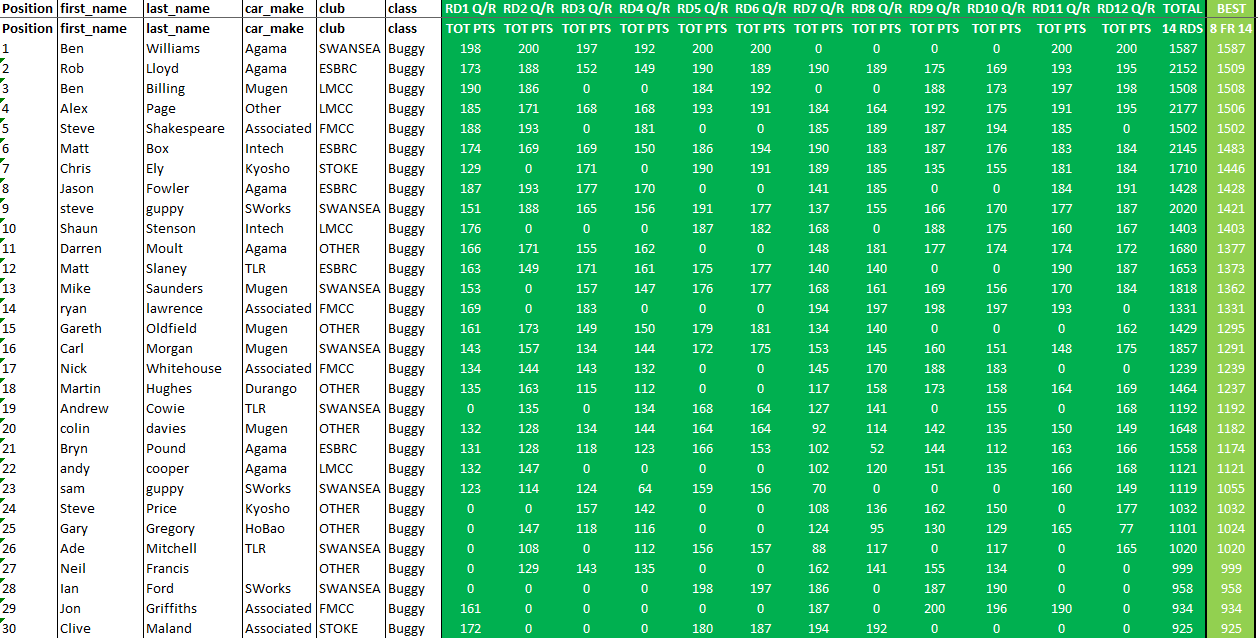 Once again a big well done to Ben from all of the Nitro X Cross team, we hope you can return next season to defend your crown!

Ben has also helped local club Swansea to a sizable lead in the club championship. Can the Swansea boys do the double and take home the club trophy too? 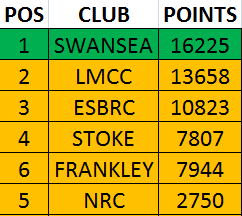 Booking in is now open for the final 2 rounds of the series, even if you havent competed in this years championship why not come and try it out? We encourage all abilities to enter and try to create an enjoyable racing atmosphere with plenty of track time for just £7.50 per day when pre booked for a 2 day racing weekend.

Booking in can be found on the Nitro X Cross website www.nitroxcross.co.uk

A massive well done to Ashlee Owen on taking the winter series title for 2012/13.

The series went down to the final round at FMCC and 2nd on the day was enough to secure the title from Matt Box in 2nd and Matt Slaney in 3rd.

Thank you from all the Nitro X Cross team to all drivers who took part in this great series and we hope to see you all at Ledbury MCC on April 6th and 7th for the start of the NX 13 Summer series. Booking in is now open for this event.

Top 3 Drivers for the series: 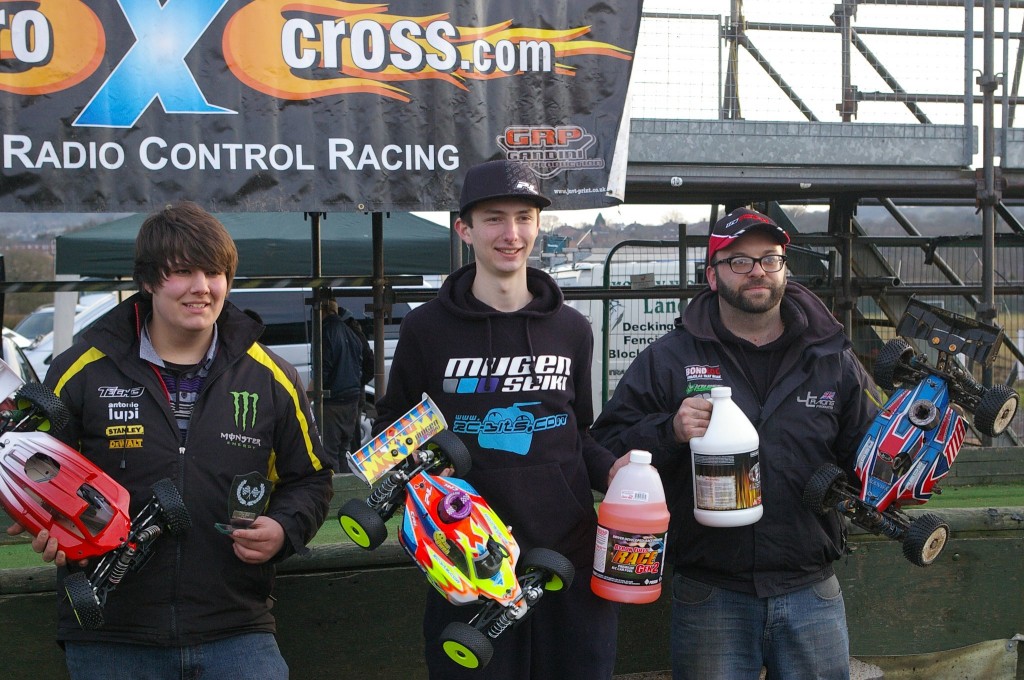 We asked you last month for your input for the 2013 Nitro X Cross summer series and here are the results! We are currently running some of these changes in the Winter series  in preparation for next years summer series and things seem to be going well. Well organised with more track time for the drivers whilst still maintaining an enjoyable atmosphere which is what Nitro X Cross is all about.

Here is a summery of the report:

The format for each day will run as follows:

Points awarded to each club member towards their clubs total.

For Example FTD 100 points A Final win 100 points = 200 driver points and 200 club points. Qualify 3rd 98 points Finish 5th 96 points = 194 driver points and 194 club points. If you do not complete 1 lap of your final you will not be awarded any race points but you will still be awarded your qualifying points. If you have bumped from a lower final but not completed a lap in your higher final you will still be awarded points from your original Final.

Booking in will open 1 day after the previous round and close on the Friday prior to the event. All booking in will take place through the NitroXCross website and a drivers list will be visible to all. Discounts will be available for early booking in and a cut off date for each round will be publicised.

We have also taken into account track comments and will be releasing the tracks soon, Dates will be announced once the BRCA have released their dates to avoid clashes where possible.

Thanks for reading and we look forward to seeing you track side in 2013 for another great series in 2013.

Here are the final standings for the Nitro X Cross 2012 series.

What a final round this turned out to be with Rob Lloyd taking the series win.

A massive thank you to everyone involved in putting on a fantastic series and I hope that you all enjoyed it as much as I did.

Steve Shakespeare takes round 7 at Weston Park in a very wet and muddy A Final!

A big thank you to everyone involved for once again hosting a fantastic weekends racing.

Please keep an eye on our facebook page for more reports and results at www.facebook.com/NitroXCross Dont forget to ‘Like’ our page to be in with a chance of winning some fantastic prizes!